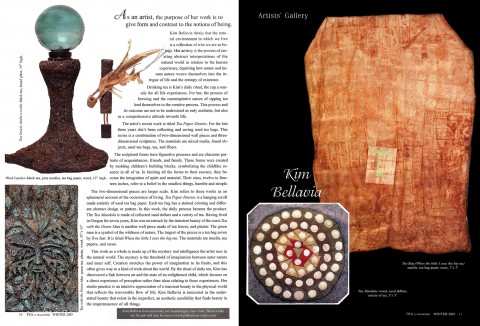 As an artist the purpose of my work is to give form and contrast to the notions of being.

Kim Bellavia thinks that nature and natural environment in which we live, is a reflection of who we are as beings. Her artwork is the process of creating abstract interpretations of the natural world in the relation to the human experience, depicting how nature and human nature weave themselves into the intrigue of life and the entropy of existence.

Drinking tea is Kim’s daily ritual, the cup a remedy for all life experiences. For her the process of brewing and the contemplative nature of sipping tea lend themselves to the creative process. This process and its outcome are not to be understood as only aesthetic, but also as a comprehensive attitude towards life.

The sculptural forms have a figurative presence and are character portraits of acquaintances, friends and family. These forms are created by molding children’s building blocks, symbolizing the child like essence in all of us. In limiting all the forms to their essence they become the integration of spirit and material. Their sizes, twelve to fourteen inches, refer to the belief in the smallest things, humble and simple.

The two dimensional pieces are larger scale. Kim refers to these pieces as an ephemeral account of the occurrence of living. The “Tea Mandala”, is made up of collected sand dollars and a variety of tea leaves.

Having lived in Oregon for seven years, Kim was awestruck by the transient beauty of the coast. “Tea with the Green Man” is another piece made of tea leaves and plaster. The green man is a symbol of the wildness in nature. The largest of the pieces is a tea bag, Seven feet high and five feet wide. It is titled “When the little I sees the big me”, the materials are muslin and tea papers.

This work as a whole is made up of the mystery and intelligence the artist sees in the natural world. The mystery is the threshold of imagination between outer nature and inner self. Creation stretches the power of imagination to its limit, and often gives way to a kind of truth about the world. By the ritual of daily tea, Kim has discovered a link between art and the state of an enlightened child, which focuses on the direct experience of perception rather than ideas relating to those experiences. Her studio practice is an intuitive appreciation of a transient beauty in the physical world that reflects the irreversible flow of life. Kim Bellavia is interested in the understated beauty that exists in the imperfect, an aesthetic sensibility that finds beauty in the impermanence of all things.